Sequencing after chromatin immunoprecipitation (ChIP seq) is a genome-wide analysis technique for DNA binding proteins, histone modifications, or nucleosomes. Due to the significant advancement of second-generation sequencing technology, ChIP-seq has higher resolution, lower noise, and more extensive coverage than its original version, ChIP-chip. As a result, ChIP-seq has become an indispensable tool for studying gene regulation and epigenetic mechanisms to reduce sequencing costs.

Cells are treated with formaldehyde to cross-link the target protein with DNA, and the cross-linked chromatin is broken into small fragments by ultrasound, generally in the range of 200-600bp. Then, the specific recognition reaction of antigen and antibody is used to precipitate the DNA fragments that bind to the target protein. Finally, cross-linking and PCR amplification of the purified DNA, high-throughput sequencing, and final comparison with the existing genome sequence determine the sequence of DNA and protein binding. 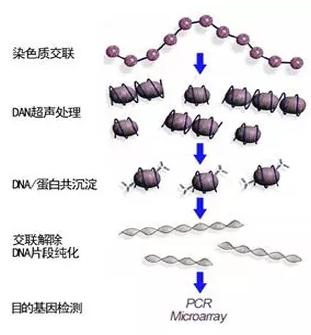 2.1. The influence of formaldehyde cross-linking on subsequent analysis of results?

Enzymes: The most commonly used enzymes such as MNase, namely: micrococcal nuclease, is a nuclease that can degrade the DNA sequence of the nucleosome junction region, originally isolated from Staphylococcus aureus. MNase digests chromatin to release individual nucleosomes.

Ultrasound interruption is not as gentle as the enzymatic lysis method. Due to the unevenness of the interruption, the background noise of the sequencing results is high, which affects the subsequent data analysis. Due to the length of the article, I won’t repeat it here.

So the choice of enzymatic hydrolysis or ultrasound interruption depends on the situation. You can refer to the following suggestions:

If the protein under study is expressed in high abundance and binds to DNA as tightly as histones, then the sample does not need to be cross-linked, and enzymatic hydrolysis can be used.

Suppose the protein under study is expressed in low abundance or does not bind to DNA tightly, such as transcription factors. In that case, it is often necessary to fix the sample with cross-linking reagents to stabilize the morphology of the protein and DNA. In this case, it is best to use ultrasound for fragmentation.

3.1 ChIP technology and its principle suitable for micro-cell level

CUT-Tag can be used to study the binding sites of transcription factors and the openness of DNA simultaneously. It can complete all steps from cell to library building within one day, and it has the characteristics of high resolution and low noise. In addition, the initial cell dosage can be as low as 50.

ChIL (chromatin integration labeling), the chromatin integration labeling technology, can be used to study the binding sites of transcription factors and the openness of DNA simultaneously. The initial cell dosage is 100-1000 cells. ChIL-seq avoids the low recovery rate caused by antibody precipitation in traditional ChIP-seq technology and is especially suitable for adherent cells. For active histone markers such as H3K4me3 and H3K27ac, the starting cell dosage can be reduced to the single-cell level.

Add cells to a 96-well plate, fix, stain, and add primary antibody to bind to the target protein, then add ChIL probe (consisting of the secondary antibody and ChIL DNA). The ChIL DNA in the probe is integrated into the target by Tn5 transposase Near the genomic DNA where the protein is located, then T7 RNA polymerase initiates transcription via the promoter in ChIL DNA. Uses the genomic DNA as a template to synthesize RNA, digests, and cleaves with DNase I to release RNA, and builds a library with purified RNA for sequencing. 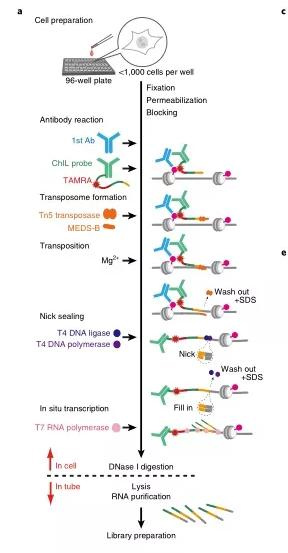 Drop-ChIP: Via a specific microfluidic device, the resolution can reach the single-cell level. This technology can study transcription factor binding sites and histone modifications at the single-cell level and learn the degree of chromatin variation between different cells from a cell-specific perspective. We believe that integrating single-cell chromatin and single-cell expression data can enable a more precise coupling of regulatory elements and target genes and a deeper understanding of their functional dynamics and relationships.

First, mix the cells to be studied with the lysate and MNase for chromatin digestion. In addition, a droplet containing many different joints is designed and reacted on the microfluidic device so that each cell droplet is connected to a joint droplet. Next, mix and mix with the buffer droplet containing DNA ligase at the same time. In this process, the linker sequence is automatically connected to both ends of the lysed chromatin fragments, and the cells are then lysed. Specific antibodies are used to precipitate the target protein, and the enriched DNA is sequenced. Align with the existing genome sequence to know the target protein action site.

Disclaimer: Article source-YiGene (WeChat public account) Author: e-gene, to spread knowledge, beneficial learning, and research. If the content is wrong, please criticize and correct it. The reprint is only for reference, study, and transfer of useful information. The copyright belongs to the original author. If you infringe on rights, please contact to delete.